If you have any enquiries we would be delighted to hear from you. Please contact us by filling in the form below.

It was very interesting to see who the early adopters were for Whose Shoes?®

Gill Phillips, creator of the tool, had expected it to be local authorities who were perhaps ‘struggling with personalisation’ who would want a tool to help them make progress. In fact, the opposite trend was seen. It was generally the “3 star” social care L.As, who came on board.

Local authorities with a culture of continuous improvement. Organisations, who had the confidence to trust their staff to innovate and try new approaches… 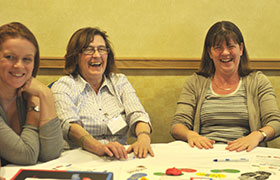 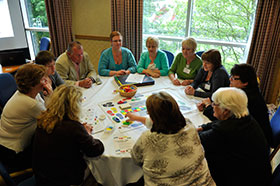 Whose Shoes?® session with Force 4 Change, a user-led group in Leicestershire . Exploring the group’s key issues and mapping to ‘Making It Real’.

Leicestershire County Council were early and enthusiastic Whose Shoes?® customers. They invited Gill to run an extended Whose Shoes?® workshop, with space and time to explore issues through in-depth discussions. They involved people using services from the outset and Gill was delighted to makean early link to Force 4 Change, a user-led group that later blossomed into an on-going relationship.

Two very creative and inspiring people from the Learning and Development Team, Sarah Wiglet and Juliet Heaton, were given scope to develop a programme of training that used the full potential of the tool and received consistently positive feedback from participants. Who else would think to build the tool into a wider ‘Walk in my shoes?’ training day complete with DVD and song?

You see… It is possible to have a bit of fun while discussing serious topics – it helps people be relaxed and to speak openly and honestly.

There is a detailed good practice case study on use of Whose Shoes? by Leicestershire County Council on Governance International website.

Community Care magazine similarly published a feature based on this project, demonstrating the impact Whose Shoes?® is having across the UK. 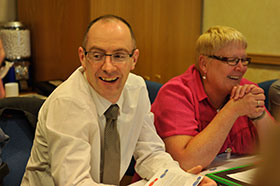 The images used on the website page backgrounds are based on graphic records
produced in real time during 'Whose Shoes®' events by New Possibilities Ltd.