If you have any enquiries we would be delighted to hear from you. Please contact us by filling in the form below.

Philippa Codd, then Service Excellence Director of the Careforce Group, contacted Whose Shoes?® creator Gill Philips, when one of her Regional Managers told her they had seen ‘a brilliant Personalisation game’ and she should try and see it.

Philippa, who is incredibly passionate about improving the way home care is delivered and meeting the aims of personalisation, thought Whose Shoes? sounded like a learning and development tool that managers and staff would embrace and enjoy at the same time. 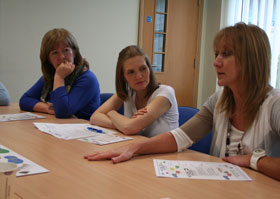 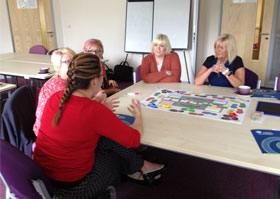 It was important to see the game in action, so it was decided that Gill would meet Philippa in Birmingham to demonstrate how the tool worked. Philippa was working very closely with Birmingham City Council Adult Social Care, to redesign some of the existing home care provision and introduce a Reablement programme into all care packages.

She decided to utilise Gill’s visit and set up a workshop, inviting her local Registered Manager, Care Supervisors and two key Managers from the City Council: a Strategic Commissioning Manager and Contracts Manager.

A lively session followed, with excellent debate, hearing from the Commissioners, Registered Manager and front line staff. This lasted the whole morning and the group managed to break down some barriers which were causing a problem and preventing Careforce moving forward to pilot a new way of managing their contracts. 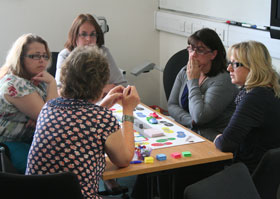 As a result of the workshop, both provider and commissioner agreed an alternative invoicing mechanism to allow more flexibility for service users and a stronger partnership at a local level.

Philippa has used the game many times since in similar situations, each time, increasing the knowledge of all stakeholders present and defining a better way to move forward.

It was fascinating to watch as a couple of key scenarios emerged from the “providers and commissioners” pile. Suddenly the issues were as clear as day: people were being asked to work more flexibly… but the systems prevented this! Brilliant to hear that this was subsequently resolved, ultimately benefiting service users wanting to stay fit and independent in their own homes”

Gill Phillips
Creator of Whose Shoes?®

The images used on the website page backgrounds are based on graphic records
produced in real time during 'Whose Shoes®' events by New Possibilities Ltd.